Guinea: 5 shot, 15 injured during clashes over military assault on driver 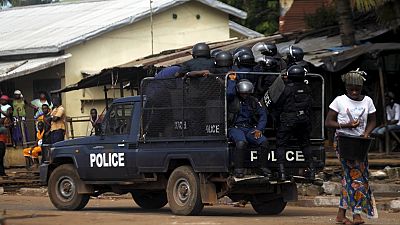 <p>17 people were injured including 5 who were shot on Friday in northern Guinea during clashes between security forces and residents over an alleged assault of a driver by soldiers.</p> <p>According to residents of the town called Mali, the violence erupted after a convoy of the regional military commander, Lieutenant Colonel Issa Camara, was blocked by a truck.</p> <p>“The soldiers who were enraged by the ‘insult’ of the truck driver beat him up and left him to his fate,” a resident told <span class="caps">AFP</span>.</p> <p>The residents were reported to have sent the driver to the hospital and later gathered in the streets protesting for justice for the driver.</p> <p>The crowd trooped to the prefecture of the town where the clashes began between the security forces stationed there and the residents, a police officer told <span class="caps">AFP</span>.</p> <p>“The police were overwhelmed by the crowd and tear gas was fired at the demonstrators. Calm returned to the city later in the evening,” Ramata Souare, a witness said.</p> <p>“At least 17 people were injured during the violence with five of them shot: two in the shoulders, two in the thighs and the fifth person on his buttocks,” a source at the hospital told <span class="caps">AFP</span>.</p>

The soldiers who were enraged by the 'insult' of the truck driver beat him up and left him to his fate.