Niger Delta Avengers attack Shell for not heeding their warning 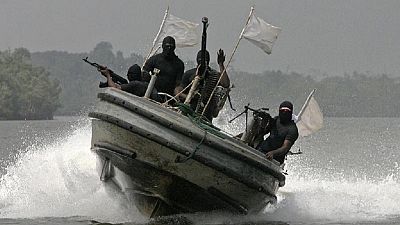 Niger Delta Avengers blew up a Shell installation after they said, the multinational oil giant refused to heed their warning to stop repairs on a installation they had earlier blown up.

‘‘At 3:00 am today @NDAvengers blow up the SPDC forcados 48” Exportline. We warned SPDC not to go ahead with repair works but they refuse,’‘ a tweet from the group read.

At 3:00 am today NDAvengers blow up the SPDC forcados 48" Exportline. We warned SPDC not to go ahead with repair works but they refuse.

The group’s actions has recently led to bombing of oil installations and facilities in Nigeria’s Niger delta region. Their latest attack on Shell comes on the back of an attack by another group on the state owned oil firm, the Nigeria National Petroleum Corporation (NNPC) on Thursday evening which resulted in the death two soldiers and four civilians, as confirmed by the Nigerian army.

But which the Avengers denied carrying out the attack. In a statement posted on their website, the said; ‘‘our war is on oil installations not to take innocent lives. For the fact we can’t give life, we also don’t have the power to take any life. But we (Avengers) are assuring the families of the affected soldiers that we will bring the culprits to book.’‘

President Buhari aborted a highly anticipated trip to the region on Thursday to formally flag off the beginning of the clean up of Ogoniland. He instead sent his vice president citing security fears.

The clean up project estimated to cost some $1 billion is expected to be funded by the companies involved in the spillage that has poisoned the creeks, swamps and the fish ponds in the Delta region, where oil was discovered in 1958.

On behalf of President Buhari, I formally launched the clean-up and environmental restoration programme in Ogoniland pic.twitter.com/seyzKh244y

Trajectory of the Niger Delta Avengers Attacks (May 25 – June 3)

The Niger Delta Avengers are quick to voice their attacks, usually taking to social media platform twitter. The last few days have been more sporadic. Below is a trajectory of their attacks. Within a spate of 10 days, they have successully attacked 6 major oil installations. Multinationals Chevron and Shell have been the hardest hit.

June 3
At 3:00 am today @NDAvengers blow up the SPDC forcados 48” Exportline. We warned SPDC not to go ahead with repair works but they refuse.

June 2
At about 2:00am today @NDAvengers blew up the Ogboinbiri to Tebidaba and Clough Creek to Tebidaba Crude Oil pipelines in Bayelsa State.

June 1
With the heavy presence of 100 Gunboats, 4 Warships and Jet Bombers NDA blew up Chevron Oil Well RMP 23 and RMP 24 3:44am this Morning.

May 28
At About 2;15am on Saturday the @NDAvengers blow up Nembe 1, 2 and 3 Brass to Bonny Trunk Line belonging to Agip and Shell.

May 27
At 11:45pm on Thursday.@NDAvengers blew up other #NNPC Gas and Crude trunkline close to Warri. Pipeline that was heavily guarded by Military

May 25
We Warned #Chevron but they didn’t Listen. @NDAvengers just blow up the Escravos tank farm Main Electricity Feed PipeLine.