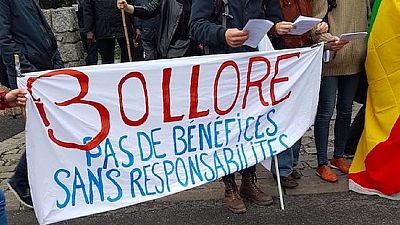 More and more dissenting voices are being raised in several West and Central African countries, as local communities and NGOs move to condemn displacement and land grabbing by industrial oil palm and rubber plantations company Socfin, which is a holding company of the Bollore group.

On Friday, demonstrations were held in Cameroon, Cote d’Ivoire, Liberia and Sierra Leone, and even outside the headquarters of the Bollore group in Paris where a shareholders’ meeting took place.

The protesters who represent a movement of thousands of farmers displaced from their lands demanded Vincent Bollore explain why Socfin (of which Bollore owns a 38.7% share) has failed to comply with 2013 and 2014 commitments intended to resolve conflicts between local communities and Socfin plantations.peoples.

Francis Ngang, Secretary General of the African Institute for Economic and Social Development (Inades) said that Socfin did not respect the commitments made at the signing of contracts which stipulated that 150 hectares of nearby villages were to remain virgin lands.

Between 2010 and 2014, the total plantation area increased by 29%. These unregulated expansions have triggered serious conflicts with local communities.

According to GRAIN, Bollore, who is also the head of the Paris-based media company Vivendi, is facing broad dissent from African organisations, NGOs, the French farmers’ union Confederation Paysanne and the activist group Attac.

Parallel to demonstrations in Paris, affected communities carried out blockades and demonstrations at Socfin facilities in West Africa: Socapalm in Cameroon, SOGB in Cote d’Ivoire, LAC in Liberia and SAC in Sierra Leone.

In light of the response from local Socfin managers, who routinely refuse to acknowledge their associations, preferring to deal only with public authorities, affected communities founded the “International alliance of local communities of the Socfin Bollore plantations” (Alliance internationale des communautes riveraines des plantations Socfin Bollore) with support from the French NGO ReAct, GRAIN further reports.

The Alliance demands that Bollore push Socfin to engage in a dialogue to return land to local communities and respect their right to compensation, healthcare, water and electricity.

The GRAIN continues that Vincent Bollore had opened the door to dialogue, but abruptly closed it, justifying the closure by virtue of his “status as a minority shareholder, not manager”.