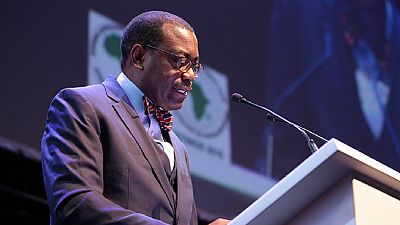 <p>Africa’s raw material export model has been identified as one of the problems associated with wealth creation leaving the continent at the bottom of the value chains.</p> <p>This assertion was made by the president of the African Development Bank, (AfDB), Dr Akinwumi Adesina, who advised that “Africa needs to diversify its export mix and add value to all of its raw materials by developing efficient and competitive value chains.”</p> <p>He made this <a href="http://www.afdb.org/fileadmin/uploads/afdb/Documents/Generic-Documents/PRST_SPEECH_ENG_Speech_delivered_by_President_Akinwumi_Adesina_at_AfDB_Opening_Ceremony.pdf" target="_blank">statement</a> on Tuesday at the opening ceremony of the 5-day AfDB Annual Meetings on energy and climate change in Lusaka, Zambia, citing cocoa exports which he says Africa accounts for 75% of its global production yet reaps only 2% of the $100 billion annual market of chocolate.</p> <p>Dr Adesina added that diversification is critical for Africa as the continent “only accounts for 1.9% of global value added in manufacturing and this has not changed for decades. It is now time to industrialize Africa.”</p> <p>On development, the president of the African Development Bank said ambitious Africa must look inward and mobilize domestic resources to help drive its readiness for industrial development.</p> <p>He however advised that to remain resilient, Africa must not get into debt crisis as many countries on the continent “face a challenge of high cost of financing the foreign currency denominated debt”.</p> <p>Dr Akinwumi Adesina also announced that the AfDB will empower women through the launching of the Affirmation Finance Action for Women which will dedicate $3 billion to support women entrepreneurs across Africa. <blockquote class="twitter-tweet" data-lang="en"><p lang="en" dir="ltr">The AfDB is launching a $3billion support facility for African women – in business, in agriculture and research..” <a href="https://twitter.com/akin_adesina"><code>akin_adesina</a> AfDBAM2016</p>&mdash; IgniteSA.com (</code>IgniteRSA) <a href="https://twitter.com/IgniteRSA/status/735184054174224384">May 24, 2016</a></blockquote> <script async src="//platform.twitter.com/widgets.js" charset="utf-8"></script></p> <p>The 2016 African Development Bank Annual Meetings brought together about 5,000 participants including heads of state and governments to discuss the social and economic development of Africa. </p> <p>Among the high profiled delegation present are Zambian president Edgar Lungu who opened the Annual Meetings, Kenyan president Uhuru Kenyatta, Rwandan president Paul Kagame and Chadian president Idris Deby.</p> <p>The Meetings end May 27, 2016.</p>

Africa only accounts for 1.9% of global value added in manufacturing and this has not changed for decades. It is now time to industrialize Africa.