AU to launch investigations into human rights abuses in Burundi 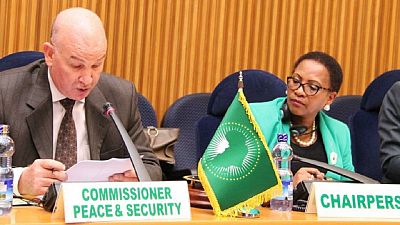 <p><strong>The African Union Peace and Security Council has reiterated its concerns about persistent human rights violations and other abuses against civilian populations in Burundi.</strong></p> <p>According to a <a href="http://www.african-union.africa-newsroom.com/press/the-595th-meeting-of-the-aupsc-on-the-report-of-the-african-commission-on-human-andpeoples-rights-achpr-on-its-factfinding-mission-to-burundi-?lang=en" target="_blank">report</a> by the African Commission on Human and Peoples’ Rights (<span class="caps">ACHPR</span>) on its findings in the East African country, AU will take required steps to carry out an “in-depth” investigation into the abuses cited in the report. <blockquote class="twitter-tweet" data-lang="en"><p lang="en" dir="ltr">The 595th meeting of <a href="https://twitter.com/hashtag/AUPSC?src=hash">#AUPSC</a> on Report of AfricanComm.on Human&Peoples’Rights on its fact-finding mission to <a href="https://twitter.com/hashtag/Burundi?src=hash">#Burundi</a> <a href="https://t.co/ZHRn1O12yM">https://t.co/ZHRn1O12yM</a></p>— African Union Peace (@AU_PSD) <a href="https://twitter.com/AU_PSD/status/730307015147438080">May 11, 2016</a></blockquote> <script async src="//platform.twitter.com/widgets.js" charset="utf-8"></script></p> <p>The council also noted the continued assassinations of military officers and civilians and condemned all acts of violence, irrespective of the perpetrators.</p> <p>“Council notes that most of the contents of the report have been overtaken by many national, regional, continental and international efforts aimed at the promotion of peace, security and stability in Burundi,” it said.</p> <p>With these findings, the AU has decided to remain actively seized in the matter. The body also highlighted the need for the full deployment of AU human rights observers, military experts and police officers.</p> <p>“Calls for the urgent resumption of the Inter-Burundian Dialogue stresses the need for the East African Community (<span class="caps">EAC</span>) mediation to take into account the recommendations in the ACHPR’s [African Commission on Human and Peoples’ Rights] Report within the context of the Dialogue,” it added. </p> <p>Since President Pierre Nkurunziza announced his bid for a third term in office, more than 400 people have been killed and hundreds of thousands have fled the nation to neighbouring countries.</p>

Calls for the urgent resumption of the Inter-Burundian Dialogue stresses the need for the EAC mediation to take into account the recommendations in the ACHPR report.