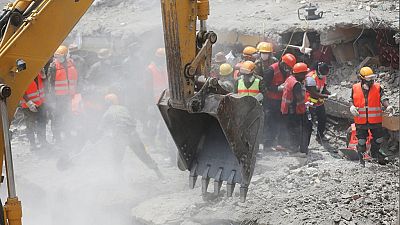 Following the collapse of a 6-storey building that claimed at least 40 lives in Huruma in Kenya’s capital Nairobi, authorities in the country began demolishing unfit buildings in the city on Friday.

Eight buildings deemed unfit for habitation were the first to be destroyed in the neighbourhood and authorities say more are set to follow.

The owners of the buildings were taken into custody but released on a $5,000 bail on wednesday, pending formal charges.

Residents in the neighbourhood could be seen trying to gather their property in a rush against time under the surveillance of heavy security presence. Some say that they did not receive prior notice of the planned demolitions.

“We did not know the building was marked for demolition as it was done yesterday. Now we are being told to vacate with our families and some of us have small children. We have no where to go,” said a resident.

Authorities say the exercise will target other neighbourhoods in the capital where a majority of Nairobi’s estimated four million people live in low income areas .

Meanwhile, survivors of the tragedy were still being pulled out from under the rubble of the collapsed building.

A pregnant woman was among the four people who were rescued but lost her baby.

Estimates indicate that at least 70 people are still missing while so far 170 people have been rescued.