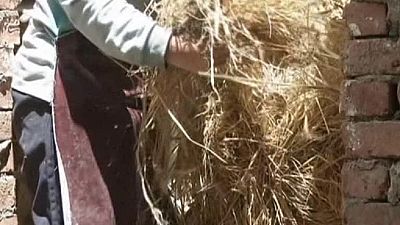 A new chemical pulping technology by a Cairo-based NGO in Egypt could help eliminate waste by turning rice straw into paper, while providing cheap insecticides at the same time.

Launched in 2005, El Nafeza for Contemporary Art and Development is an officially registered NGO which hires deaf-mute workers to help improve the lives of disabled people in the country.

Enas Khamees is the NGO’s manager and she stresses that one of their biggest challenge has been getting their products into the local market, as due to the slightly higher cost of rice paper, the products luxury items.

The team has however diversified by turning their hands to producing ornate notebooks, boxes, frames, cards and other decorative pieces.

“We take the rice straw bales, which are completely dry, we soak them in water from two days to a week, so that we can take them after and we put them on a stove, to be cooked well for two to three hours. After that, we begin the milling phase, and of course it goes through many cleaning phases. It’s milled, then turned into fibre, then put in frames, depending on the size we want, A4 or A3, then put on the wall [to dry out],” she explains the process.

She strongly believes in reducing waste and doing her utmost to protect the local environment.

“We protect the environment, in a way, because we make the paper out of rice straw, which for more than 15 years now has caused an environmental problem – we have the ‘dark cloud’ which is mainly caused by the burning of rice straw. It’s because the factories that we have in Egypt stopped taking rice straw, and we now instead import paper pulp, which comes from China and is made out of rice straw. So, we must protect what we have: the skills we have or our factories, to protect us and protect our environment. They must go back to operating like before,” she said.

All these competing demands have been difficult to manage with limited funding, hindered by the uncertainly that ensued after the 2011 revolution.

“After the revolution, the market became slower, so when one person quits for any reason, we didn’t hire a replacement, because we haven’t had funding since 2009. We depend solely on the marketing of our products, and that’s since 2009. So, this has put a huge burden on the NGO as it tries to cover its expenses, from rent to salaries and everything else,” she said.

Khamees added that the number of workers at the NGO has been reduced from 35 to just 7 workers in recent years, which has meant a heightened workload on existing staff.

El Nafeza has been successful in exporting its products to Germany over the past six years, and hopes to expand into other European markets.

Khamees says its international appeal helps to balance the books when local interest is low.

Of late, local stores have been stocking Egyptian-made products to support local companies, such as the popular Diwan bookstore chain.

There are over 4.5 million rice farmers in Egypt who burn four million tonnes of rice waste annually, creating both an economic waste and an environmental problem from air pollution.

El Nafeza regularly holds workshops for young people, in particular deaf-mute girls who are often sidelined in the workforce, hoping to throw them a lifeline in a society struggling with a lack of employment opportunities and in turn keep ancient techniques alive.