Jailed Ukrainian pilot could be freed in prisoner swap with Russia 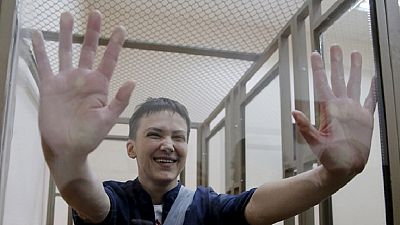 A prisoner-swap deal has been reached with Russia which could lead to the release of jailed Ukrainian pilot Nadiya Savchenko – that’s according to Ukraine’s president.

Savchenko has been sentenced to 22 years in a Moscow prison for her alleged role in the deaths of two Russian journalists. Kyiv says she is a prisoner of war and should be freed.

“A recent decision by a Ukrainian court to condemn two Russian servicemen opens some opportunities for operating an exchange mechanism. However, I would ask everyone to avoid any speculation in this regard, including the time of Savchenko’s return or any other further steps,” Petro Poroshenko, Ukranian President said.

But Poroshekno certainly appeared confident after a phone call to Russian President Vladimir Putin, but Russian Foreign Minister Sergey Lavrov was less so.

“At the moment all our Western partners, overseas and in Europe, talk only about Nadezhda Savchenko when the topic of human rights in the Russian Federation is discussed. No one remembers now that Russian journalists were killed in Ukraine,” Lavrov said.

In a sign that a swap could be imminent, a lawyer for the two Russian servicemen convicted by Ukraine for waging terrorism, said neither would be lodging an appeal against the verdict.