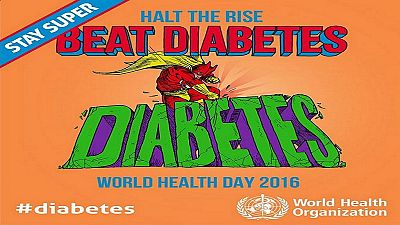 The World Health Organisation (WHO) has committed to raising awareness on diabetes during this year’s World Health Day on April 7.

According to WHO, the number of people living with the non-communicable disease has risen several folds since 1980.

Furthermore, over 400 million adults live with diabetes, a number likely to double in the next 20 years.

“On the occasion of World Health Day 2016, WHO is launching its first ever global report on diabetes. It draws attention to a huge rise in the number of adults affected by diabetes. They have moved up from 108 million in the 1980s, to 422 million today. This is four times more,” said Etienne Krug, Director, Department for Management of Noncommunicable Diseases, Disability, Violence and Injury Prevention.

With these figures in hand, WHO has called for global action on diabetes as the epidemic has major health and socioeconomic impacts, especially in developing countries.

The organisation has highlighted several measures to be undertaken that will aid in halting the rise in diabetes.

The measures needed include broadening health-promoting environments to reduce diabetes risk factors, strengthening national capacities to help people with diabetes receive the treatment and care needed, among others.

“While in the past the highest rates were found in developed countries, those countries now have the lowest rates, and where we are seeing the most of the rise is in developing countries,” Krug noted.

The main goals of the World Health Day 2016 campaign will be to increase awareness in particular in low-and middle-income countries. The campaign will focus on the rising tide of diabetes.

“If we are to make any headway in halting the rise in diabetes, we need to rethink our daily lives: to eat healthily, be physically active, and avoid excessive weight gain,” said Margaret Chan, WHO Director-General in a statement“”:

“Even in the poorest settings, governments must ensure that people are able to make these healthy choices and that health systems are able to diagnose and treat people with diabetes,” Chan added.

Diabetes develops when the pancreas does not produce enough insulin, or when the body cannot effectively use the insulin produced. WHO predicts that diabetes will be the 7th leading cause of death in 2030.