FIFA’s new president Gianni Infantino on Wednesday arrived in Bolivia on the third leg of his South American tour after Paraguay and Uruguay.

He was treated to a royal welcome at the Cochabamba airport where he was received by the President of the Bolivian Football Federation, Rolando López.

Infantino later met the Bolivian leader Evo Morales who had some kind words for the newly-elected FIFA boss.

“We have been informed that our brother Infantino represents a new generation of international football officials. I think he carries a great responsibility to the dignity of football to continue to spread soccer around the world. Football is above the United Nations,” Morales said.

The FIFA boss was presented with the National Order of the Condor of the Andes, one of Bolivia’s highest national honors. A gesture highly appreciated by the FIFA President.

Infantino, who will be in Bolivia for 2 days, is expected to meet with the country’s soccer club leaders to analyze the construction plans for a high performance soccer center in Cochabamba. 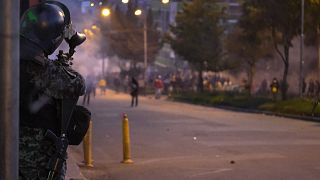