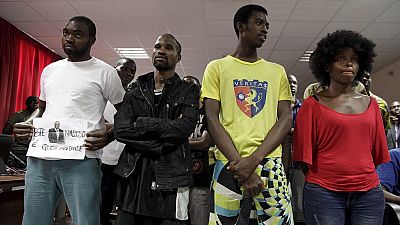 Seventeen youth activists in Angola have been sentenced to prison terms of between two and eight years for planning a rebellion against president Jose Eduardo dos Santos.

Among them is prominent Angolan rapper Luaty Beirao who embarked on a 36-day hunger strike between September and October to protest his detention.

He is sentenced to five and a half years in prison for “rebellion against the president of the republic, criminal association and forgery,” according to AFP.

I'm outraged at the news out of #Angola. 17 youth activists including LuatyBeirao sentenced to jail for "rebellion" https://t.co/2l5xHsioEE

He and the 16 others were arrested in June after discussing a book Gene Sharp’s 1993 book From Dictatorship to Democracy: A Conceptual Framework for Liberation about non-violent resistance at their book club.

Beirao, also known by his stage name Ikonoklasta, has been an outspoken critic of the government, calling for a fairer distribution of the state’s oil wealth.

Domingos da Cruz, said to be the “leader” of the group was sentenced to eight and a half years for attempted coup and conspiracy.

One of the convicts, Nuno Dala who has been on a hunger strike since March 10, was absent in court as he had been hospitalized, reported AFP.

Michel Francisco, a lawyer representing ten of the accused persons, after the court session said he would appeal the ruling.

He said justice had not been served and further argued that the case had been politicized adding that the judge was “only obeying superior orders from the president.”

The trial had prompted global outrage, with rights groups saying it showed that Mr dos Santos’ government was becoming increasingly repressive in its attempts to remain in power, according to BBC.

But prosecutors have defended the arrests, arguing that the 17 accused persons were planning an uprising among students and workers “with incalculable consequences.”

The jailed activists had previously held demonstrations demanding the resignation of President dos Santos who has been in power for 36 years.

President dos Santos on March 11 announced he would not be seeking reelection when his term in office ended in 2018.