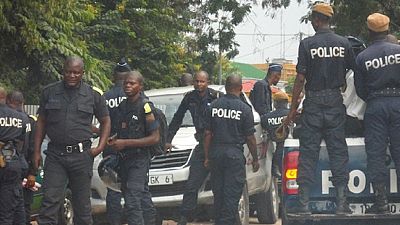 <p>A campaign manager of opposition candidate, General Jean-Marie Michel Mokoko, has been arrested at his home in Brazzaville on Sunday morning, according to a communication officer of the campaign team.</p> <p>Michel Rodriguez Abiabouiti told <span class="caps">AFP</span> that Anatole Limongo Ngoka, the National Coordinator of the support committees of the candidacy of General Mokoko, who came third in Sunday’s presidential election according to official results, “was arrested at home at 7:30 local time (0630 <span class="caps">GMT</span>).”</p> <p>“He has been detained at the <span class="caps">DGST</span>,” the Directorate General of national security, a service of the police which has invited General Mokoko severally over a video showing the candidate planning an attempted coup a few years ago. </p> <p>The information given by Abiabouiti was not confirmed by the <span class="caps">DGST</span> at midday Sunday but the campaign manager is believed to be held for compromising state security. <blockquote class="twitter-tweet" data-lang="en"><p lang="en" dir="ltr"><a href="https://twitter.com/hashtag/Congo?src=hash">#Congo</a> <a href="https://twitter.com/hashtag/Brazzaville?src=hash">#Brazzaville</a> police have arrested Anatole Limbongo-Ngoka, opposition campaign director, for compromising state security <a href="https://twitter.com/hashtag/Mokoko?src=hash">#Mokoko</a></p>— Michel Arseneault (@miko75011) <a href="https://twitter.com/miko75011/status/714053107840368640">March 27, 2016</a></blockquote> <script async src="//platform.twitter.com/widgets.js" charset="utf-8"></script></p> <p>According to Abiabouiti, another supporter of General Mokoko, Jean Ngouabi, was arrested on Thursday in the north of the country. </p> <p>Mr. Ngouabi is the General’s campaign manager in the district of Makoua. He has also been detained at the <span class="caps">DGST</span> in Brazzaville “and is being accused of causing an uprising,” Mr. Abiabouiti said. </p> <p>The General himself “is in a safe place,” he added, without adding any more information. </p> <p>President Denis Sassou Nguesso, who has been in power for over 32 years, was declared winner of Sunday’s presidential election on Thursday with over 60% of votes in the first round. </p> <p>Five opposition candidates have rejected the results calling it a “massive fraud”. In a joint statement signed by General Mokoko, they urged the people to challenge the results through legal and peaceful means starting on Tuesday by observing “ghost town” across the country. </p> <p>On Thursday, shortly after the results were announced, the General called for a “civil disobedience” which the authorities took as a call for a “revolt”.</p>