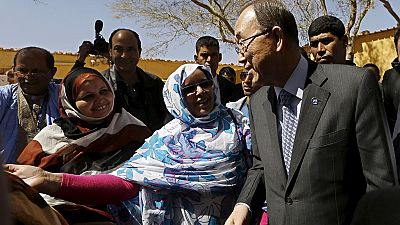 <p>The UN Secretary General, Ban Ki-moon on Wednesday rejected criticism of Morocco after his visit to the region to restart talks between Rabat and the Polisario Front over Western Sahara, claiming that his goal remained a priority. </p> <p>Mr. Ban visited Mauritania and a Sahrawi refugees camp in Algeria last week in the hope of shifting positions on the conflict that has lasted four decades. At the end of the visit, the Moroccan government stated on Tuesday that the Secretary General made “verbal excesses and unjustified complacency.” </p> <p>The spokesman for the Secretary General, Farhan Haq reacted to the remarks saying that: “the Secretary General considers himself and the United Nations as neutral partners on the issue.”</p> <p>“Mr. Ban did everything he could to resolve the situation in Western Sahara which has lasted for some time. The Secretary General wanted to make sure that in the last year of his term, this problem will be included in the international agenda,” said Mr Haq. </p> <p>After his visit to the Sahrawi refugees in western Algeria, Ban Ki-moon was “deeply saddened by this humanitarian tragedy.” The spokesman said adding that the Secretary General has asked his envoy to the Western Sahara to resume tours to try to restart talks between Rabat and the Polisario Front. </p> <p>Ban has said that he himself would pay a visit later this year – which is his last as Secretary General – to the Moroccan capital and Laayoune, the main town in Western Sahara which is also the location of the headquarters of the UN Mission (<span class="caps">MINURSO</span>). </p> <p>Western Sahara is a former Spanish colony controlled by Morocco. However, Morocco wants Western Sahara, which is rich in phosphates and possibly offshore oil and gas, to be an autonomous part of Morocco and disagrees with Polisario over who should take part in the referendum. </p> <p>The UN Security Council must consider the renewal of <span class="caps">MINURSO</span>’s mandate next month, which is located on the site since 1991 mainly to ensure compliance with the cease-fire between Morocco and Polisario.</p>