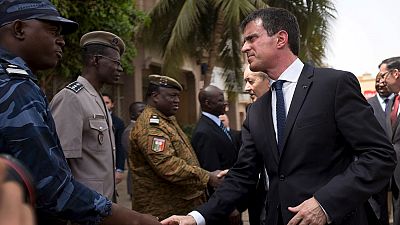 <p>French Prime Minister, Manuel Valls on Saturday pledged greater military assistance to former colony Burkina Faso and other Sahel countries in the face of a growing Islamist insurgency.</p> <p>French troops stepped in to help Burkina Faso during an attack by al Qaeda militants on a hotel in its capital last month that killed 30 people.</p> <p>Valls met President Roch Marc Christian Kabore and then visited the site of January’s deadly attack at Hotel Splendid with the country’s Prime Minister Paul Kaba Thieba and Security Minister Simon Compaore.</p> <p>He said assistance would come in the form of help for a two-year-old development and security body known as the G5 Sahel incorporating Mauritania, Mali, Niger, Chad and Burkina Faso, as well as support for the U.N. peacekeeping force in Mali.</p> <p>The Prime minister, and Defence Minister, Jean-yves le Drian had on Friday met with French troops stationed in Mali since 2013. The soldiers have been in the area fighting Jihadists and separatists as part of an effort to help secure the volatile north.</p> <p>While in Mali’s capital, Bamako Valls described the fight against the armed Islamists as a battle of brutality.</p> <p>“Liberty must be defended. France is fully engaged. It’s in essence a battle of humanity against barbarity.”</p> <p>Northern part of the country was taken over by an alliance of separatists and al Qaeda-linked Islamists in 2012 before a French-led force took back the territory.</p> <p>“Despite the trials and dangers, you have stayed and others have joined you,” he told them.</p> <p>The prime minister met with Malian president Ibrahim Boubacar Keita and was honored with the title ‘Grand officer of the National Order of Merit of Mali’.</p> <p>Islamist militants have expanded their attacks in recent months into Mali and beyond. 20 people died in a devastating siege on a Hotel in Bamako in November last year.</p>