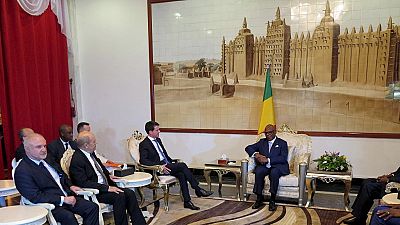 <p><strong>French Prime Minister, Manuel Valls says his country is bent on ensuring that peace reigns in Mali. He gave the reassurance during talks with Mali’s president, Ibrahim Boubacar Keita.</strong></p> <p>“ It is necessary to defend liberty. France is fully engaged. It is an essential fight by humanity against barbaric acts,” Valls said.</p> <p>The fight against jihadists in northern Mali dubbed “operation serval” in 2013 has been replaced with “operation Barkhane” which Valls believes has attained global success.</p> <p>“France and Mali are not facing the threats of terrorism alone. It is a threat to all countries and continents. It is a global threat which we must tackle. This threat has strongholds in the Sahel and Levant regions. Through chaos and political vacuum, a pseudo state intends to establish terror and enslavement by building a new caliphate,” Valls said.</p> <p>French citizens were congratulated for staying in Mali despite the danger. </p> <p>Manuel Valls visits Gao, one of northern Mali’s largest cities on Friday where operation Barkhane is in effect.</p> <p>The French Prime Minister will be in Burkina Faso on Saturday where he will hold talks with President Roch Marc Christian Kabore on the need for collaboration between Bamako and Ouagadougou to fight terrorism.</p> <p>Northern Mali fell to the hands of jihadist groups linked to Al-Qaida between March and April 2012. </p> <p>The Islamists were later dispersed by an international military intervention which is still ongoing.</p> <p>The Malian troops are yet to take full control despite peace agreements to isolate the jihadists.</p>