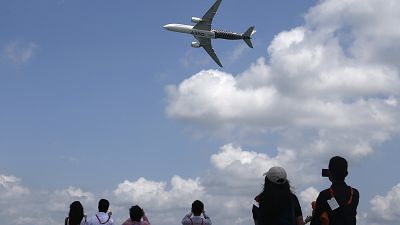 As the Singapore Airshow 2016 commences next week, plane producers, Boeing and Airbus are very optimistic of a transient growth in Asia.

Although, China, the world’s second-largest economy is hinting at a slowdown, its aviation segment is still on a roll.

Airbus Chief Executive, Noel Forgeard on Monday said the company is launching a major campaign to raise its market share in Asia- Pacific, focusing on Japan and China.

The manufacturing company wants to raise its market share in the region to the 50% it enjoyed worldwide in 2001. It currently stands at 43% overall region-wide, but stands around 20% in Japan.

“Our share of the total Asian backlog (of aircraft), without Japan, is 43% so we are not at the same extent as our backlog figure worldwide which is 54%, though it is better than the figure of 30% of 10 years ago,” he said.

He said the merger of Japan Airlines and Japan Air system to create new super-airline, would open up real opportunities to gain market share.

According to the world’s largest plane maker, Boeing Co. Air China Ltd, China Southern Airlines and several Chinese airlines will require more than 6,300 new planes worth $950 billion by the end of 2030.

This constitutes about 17 percent of global demand.

Despite the economic slump, the Chinese government is assuring of consumers spending.

The country is also spending on the construction of new airports to prompt air travel.