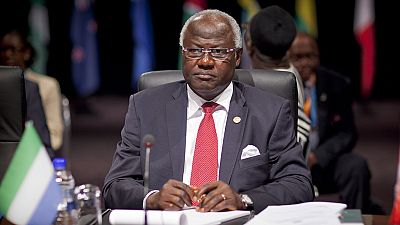 Sierra Leone President, Ernest Bai Koroma has been urged by his supporters to extend his term in office

According to the government spokesman, Alpha Kanu, the leader is not planning to stay in office for a second term since people in Sierra Leone have the constitutional right to express themselves.

Koroma’s supporters argue that, his second term in office was interrupted with the fight against Ebola, which claimed the lives of about 4,000 people.

They also say that his extension in office will allow him to make up for the loss and improve the lives of Sierra Leoneans.

Civil society organisations have however rejected the move saying that it will only lead to erosion of democracy of the country.

“Third-termism” by some African presidents has led to increased political tension, especially with the unrest in Burundi.

The supporters calling for his third term in office are mostly rural women and young people, and who are mainly from his home area.

Well-designed T-shirts with the inscription More Time have been seen in areas where calls for his extension in office are loud.

“He needs More Time due to #ebola“ UmaruFofana on virus cited in bid to extend #SierraLeone President Koroma's term https://t.co/b48UgXdSO6

Koroma was first elected in 2007 and was re-elected for the second and final term in 2012.