Ex-Guantanamo detainees pose no threat to Ghana- US Embassy 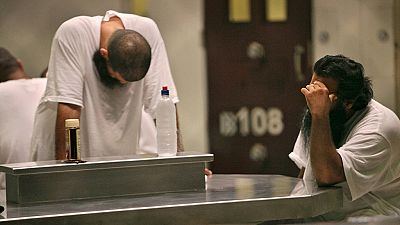 <p>The US embassy in Ghana says the Ex-Guantanamo detainees are in Ghana but they will not pose any threat to the security of the country.</p> <p>Daniel Fennell, Public Affairs Counselor at the US Embassy in Ghana told an Accra-based radio station that their “current assessment is that these two people coming to Ghana do not pose a security threat. So the programme that Ghana will be bringing them through is a programme to allow them to be part of the society, to have community contact to have access to their families and to be reintegrated into the world.” </p> <p><a href="http://projects.nytimes.com/guantanamo/detainees/202-mahmmoud-omar-mohammed-bin-atef">Mahmud Umar Muhammad Bin Atef</a>, 36, and <a href="http://projects.nytimes.com/guantanamo/detainees/506-khalid-mohammed-salih-al-dhuby">Khalid Muhammad Salih Al-Dhuby</a>, 38, were transferred from the detention facility at Guantanamo Bay to Ghana, the US embassy announced on Wednesday. </p> <p>The former detainees are said to have arrived in the country and will settle for two years, but will not give further detail on their whereabouts .</p> <p>“The two detainees that were transferred to Ghana have already arrived…we don’t have access to the specifics of their whereabouts, you have to go to the government of Ghana for that,” said Daniel Fennell, Public Affairs Counselor at the US Embassy in Ghana.</p> <p>“The United States is grateful to the Government of Ghana for its humanitarian gesture and willingness to support ongoing U.S. efforts to close the Guantanamo Bay detention facility,” it said in a <a href="http://ghana.usembassy.gov/pr-01072016.html">statement</a>.</p> <p>A statement from Ghana’s Ministry of Foreign affairs said the government was requested to <a href="http://www.africanews.com/2016/01/07/ghana-to-house-ex-guantanamo-prisoners/">provide humanitarian assistance</a> to persons affected by the conflicts in Syria,Yemen and Rwanda.</p> <p>Th government of Ghana has been criticised by its citizens who question why it decided to accept this deal from the US government. </p> <p>Meanwhile, a lawyer for one of the detainees, Bin Atef, told the <a href="http://www.nytimes.com/2016/01/07/us/politics/us-sends-twoguantanamo-detainees-to-ghana.html">New York Times</a>, that his client is pleased to have been accepted by Ghana.</p> <p>“He is very appreciative and happy Ghanaians are taking him,” George Clarke said.</p> <p>The detainees are expected to be monitored but not in a prison facility.</p>

These two people coming to Ghana do not pose a security threat.