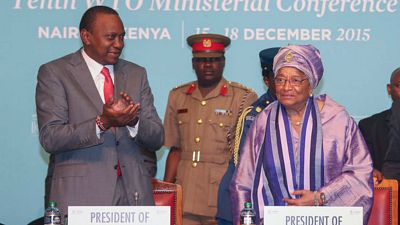 Liberia is on the path of economic rebound after it became a member of the World Trade Organisation (WTO).
Roberto Azevedo the Director General of the organisation told the WTO conference”:https://www.wto.org/english/news_e/spra_e/spra105_e.htm in the Kenyan capital, Nairobi that the West African nation will become a fully fledged associate in June 2016 once the deal is ratified. Liberia had applied for the WTO membership eight years ago.
The decision was conveyed at the body’s first ministerial conference in Africa after trade ministers unanimously welcomed the country’s membership deal.
Liberia is set to largely benefit from this newly acquired status as the country is recovering from an Ebola epidemic. The country has been lauded by WTO members for its commitment in the face of adversity.
“I pay tribute to Liberia’s efforts to overcome the scourge of Ebola. I hope that this achievement here today will help the country to continue on the path of hope, progress and development,” Azevedo said.
Since the Ebola outbreak”:http://www.cdc.gov/vhf/ebola/outbreaks/2014-west-africa/case-counts.html in 2013, that ramaged through West Africa, Liberia was one of the hardest hit nations accounting for about 4,800 deaths out of 11,000.

The country’s economy has since declined recording less than a percentage growth. Moreover, in September 2015 President Ellen Johnson Sirleaf said that the country will require two years to recover its economic footing.
According to the International Monetary Fund (IMF), Liberia should start experiencing a gradual recovery in 2016.
“Liberia’s accession to the WTO marks another turning point in our history, particularly in our journey of economic transformation for inclusive growth,” President sirleaf explained.

The international organisation will aid Liberia in stimulating economic growth by assisting the country in carrying out day to day trade negotiations.
Liberia becomes the 163rd WTO member and the 35th least developed country to become a member of the trade body.
“Without a doubt, WTO membership carries considerable gains and benefits,” Kenya’s president Uhuru Kenyatta said. “Liberia’s Accession Package provides a platform for continuing domestic reforms and should inspire other African countries in their domestic measures.”
The 10th ministerial conference of the WTO held on the 15 to 18 of December 2015 was attended by over 3,000 delegates from across the world.

“Liberia’s accession to the WTO marks another turning point in our history, particularly in our journey of economic transformation for inclusive growth," President sirleaf explained.